How Not To Get Stuck On The Starting Line

Marathon runners have a knack.

Prolific writers have a secret.

The satisfied minds behind completed projects have a tool. 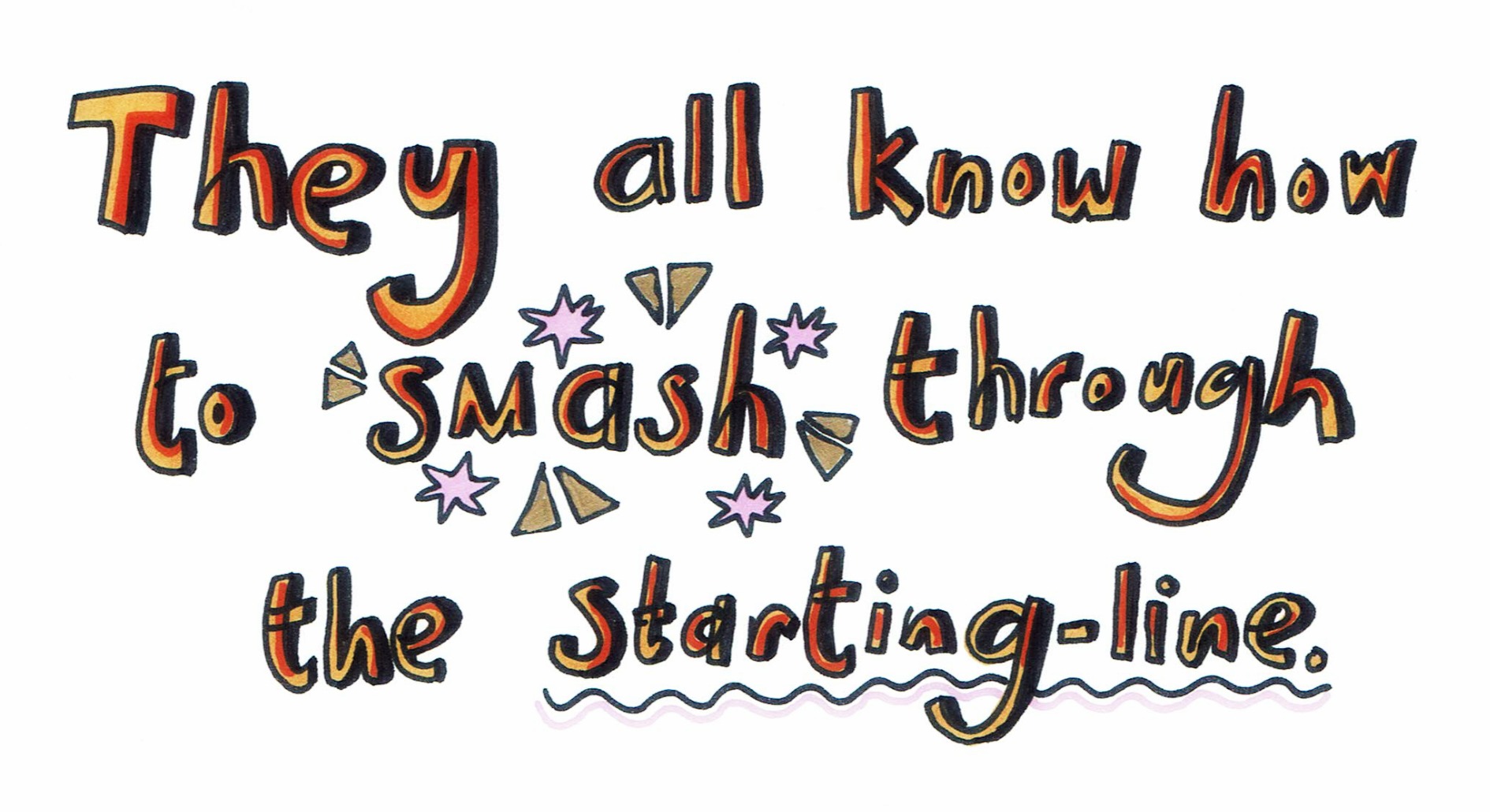 You’d think that getting started is the easiest part of Making Something Happen, particularly if that Something is wildly wonderful and we’re all fired up with mojotastic excitement.

However, moving past the stage of starting can sometimes be the biggest challenge.

Do you ever experience this?

The runner in me wants to run, yet I can find every excuse under the sun to avoid simply getting out of the door.

… you name it and I’ll have used before I’ve even laid a finger on my sports bra.

Lately though, I’ve cracked the knack of the runner and worked out a way to get myself – at least – out of the front door.

The same thing has happened with my writing.

Over the years I have aborted countless novels, short stories and writing projects because I’ve become hung up on perfecting the start.

Gallantly she writes Chapter One, then courageously she gallops forward through several more chapters.

Yet just as we are lulled into believing that Bethan is going to hit half way, the tribe of Let’s Have A Quick Break and Read Everything From The Beginning ambushes.

The tribe takes no prisoners.

Their arrows are tipped with forgetful-juice.

Before Bethan knows it, she is backtracking through the book and reading the beginning pages.

As always, the beginning isn’t quite right.

Then getting frustrated and working until Stupid-O’clock trying to perfect things.

Eventually she thinks she has cracked the code.

But then, on rereading the next morning, Bethan discovers that she must have cracked her brain, because what she wrote last night is clearly shitter than a shit-bug.

Before long, Bethan and her Manuscript are dying in the desert. Their lips are crusty. Their eyes are blood shot. They haven’t hallucinated about finding water in days.

It goes into a drawer.

Thankfully, in my antiquity, I have now worked out the secret of not getting hung up with beginning lines/paragraphs/chapters/scenes.

This is something of a relief. 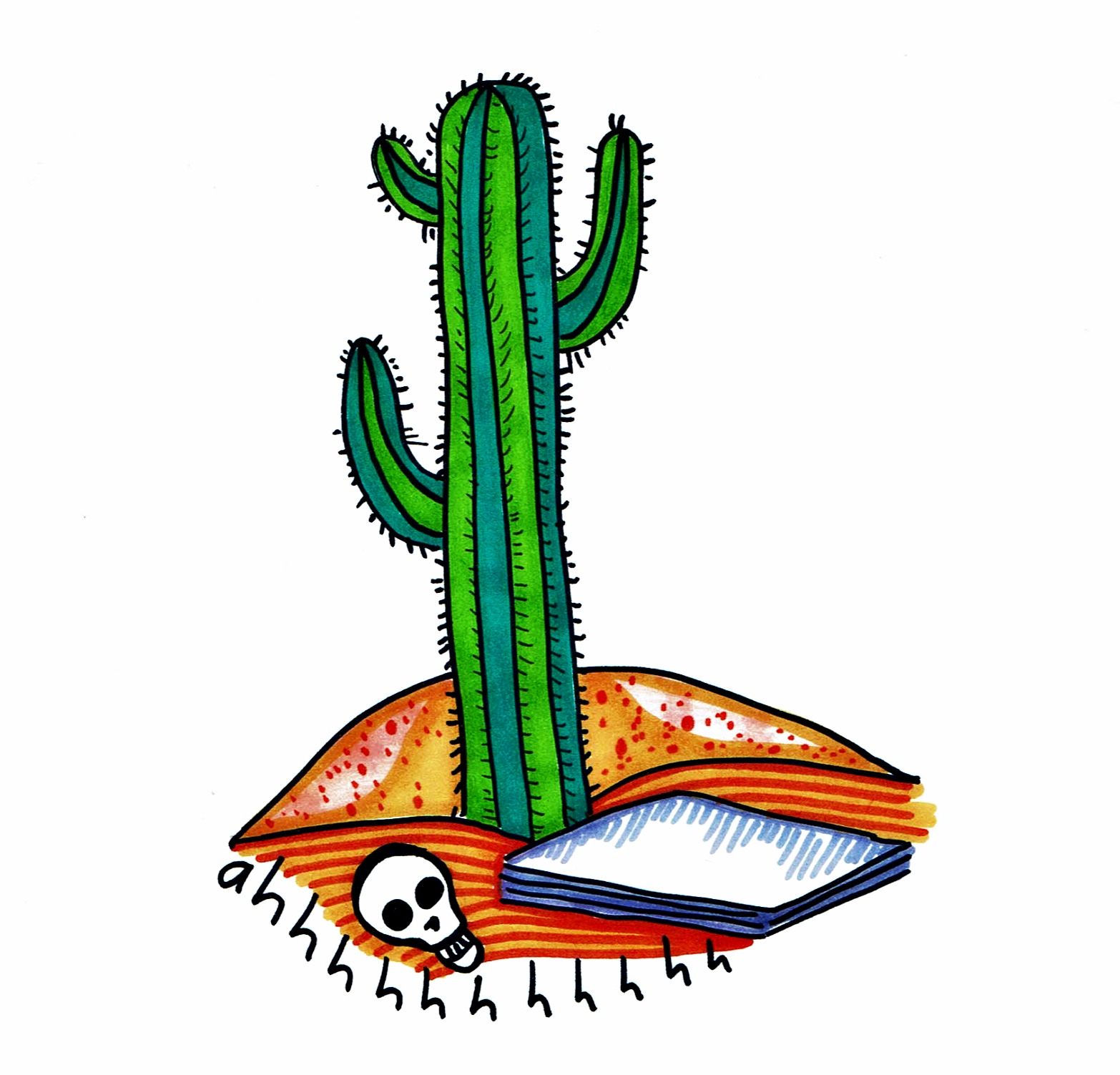 But despite ALL of this knackishness and secret code-cracking,

I was recently hit with another Starting Line Sabotage Crisis.

This month I’ve been working on turning the Gorgeousness Programme into an online e-course.

This project was to be juicy, beautiful, fun, inspiring and full of creativity.

I’d worked hard to create a timeline and sequence of jobs that needed actualising before the next phase could begin. My starting point was to work out the ascetics of the site.

You are hearing the noise of my teeth as I chew a table top in sheer frustration.

You’d think that creating the look and identity of a new site would be easy.

The pressure of wanting to get this external face “right” – and also working to a deadline – drew a *helpful* blank curtain straight through my thoughts.

As a result, getting past the starting line was very hard.

In the end I got there.

If you’re facing any sort of Starting Line Crisis, here are a few tricks I’ve learnt to avoid getting stuck at the starting line.

I’d love to know how you get on!

Yes, I know this can be REALLY, REALLY BLOODY hard, but your mind is just being lazy.

Your body is not lazy.

Your body is amazing and would much rather go out and experience some active fitness than sit in and look at a screen (which, if we’re honest, is what your mind has an alternative plan instead).

If you can’t ignore the excuses, make a compromise.

Put your running gear on and reassure yourself that you’re just going for a walk instead.

Then, once outside, put one foot in front of the other.

Increase the speed that you are doing this.

Once you’re moving you’ll realise that sometimes your mind, at times, has no idea what it’s talking about. This makes ignoring it’s excuses much easier in future.

Get on your Cowboy Horse and ride.

Or (if you lean towards being a Native American) get on your Chickasaw Pony and flipping go for it.

Write it all down like you have three hours to complete this whole thing.

Write to the end and don’t read back.

If you get all jibbed out at the beginning, play a game. Challenge yourself to write your starting chapter/paragraph as imperfectly as you can.

Make it badder than bad and all the way through (I shall reiterate) resist rereading, instead plunging forward until draft one is complete.

During many of my coaching workshops, I have led participants through visualisations that allow them to access other versions of themselves. For example, during work with people in recovery from addiction, I would lead them through a process in which they met a “parallel self”. This parallel self was someone who hadn’t started misusing substances and was living the life that the person deeply dreamed of living.

Once they had connected with their parallel self, people were asked to explore this parallel person’s life.

Where did they live?

Who did they associate with?

What activities made up their day?

Finally, the person could then talk to their parallel self and ask any questions or seek some advise.

This sort of exercise is common in coaching and personal growth work. Some visualisations will focus on a future self or a more spiritually evolved self.

When I faced my Starting Line Crisis with the Gorgeousness Programme, I was lucky enough to find a fabulous meditation by Tara Mohr of the Playing Big leadership program. She gives away an audio in which you can speak with your Inner Mentor and  ask any questions you have.

It was during this visualisation that I asked my Inner Mentor about the ascetics of the Gorgeousness Programme.

The answer came with clarity, simplicity and power.

I followed what my Inner Mentor said and have smashed my starting line.

You can find Tara’s meditation here.