When you live in a seaside town and you spend a lot of time by the sea, you get to observe a lot of bodies. Some of these bodies are local and familiar such as the mahogany brown G string lady. Or the wiry, whippet sand runner. Others are recognisably non-familiar; city dwellers on a weekend break; holiday makers and people from other towns. 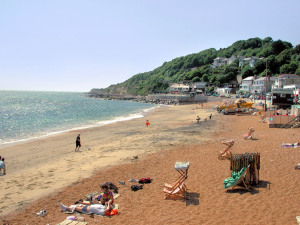 Some of these bodies sit in billowy pastels, reading books with rounded spines. Others wear sunhats and block on their noses and keep their children under strict surveillance. Others splay themselves out on towels, face down, commando tanners.

An interesting observation is how people make their way down to the sea.

A lot can be taken from The Walk, you know.

You can read, almost instantly from the body language, pace, stance and posture, all sorts of things about that person. You can tell how comfortable they are in their skin; how they are feeling about going in the sea; their self consciousness; their lack of self consciousness; whether they are enjoying being seen; whether they recoil at being seen. You can even tell a little about their health, their job, their fitness which also says a lot about lifestyle. Some people knot their arms around themselves. Others pull back their shoulders. Some hurry. Some stroll. Some want to hurry but force themselves to stroll.

And I see a lot of them.

So do Pix and Roo.

The other day the three of us were on the beach. Roo had stripped off immediately and run down to the sea in a comedy Mr Bean fashion that he has developed for the benefit of any observers. Within seconds he was in the water, bracing his little flesh shell and pulling a shocked expression.

Meanwhile Pix and I, sat on the shingle, running the sand through our fingers, talking and gazing and just … being. Nearby, I noticed a couple with their backs to us. They weren’t that old; in their late twenties, early thirties perhaps. I immediately knew they were visitors and not locals. Their body language said that the relationship was fledgling – not brand new – but in its sixth or seventh month maybe. I didn’t think that they had children from previous relationships. The woman was wearing a bikini. She was quite large and curvy. Her lower body reminded me of a Greek vessel, a earthern ware pot in a beautiful garden. On her back the fat had created two folds and her hair, blonde and silky, billowed down. The man next to her was also large. He was wearing a sunhat and was laughing, his gorgeous Buddah belly quaking and shaking. They were both oblivious to anyone. In love with each other. In love each other’s bodies and smiles. And hearts.

Then they got up to go and frolick in the sea, threaten to pull each others swimmers off and all that funny stuff that people do when they are first in love and filled with playful fun.

I glanced across to Pix.

She was staring at the couple.

“Bodies are beautiful, aren’t they?” I said.

Now Pix jerked her head and stared at me.

I nodded to the couple as they laughed and ran down to the sea, their arms all entwined with each other’s. “Them. Her. Look. Aren’t bodies beautiful?”

“But …” began Pix, then paused. She was bamboozled, perplexed. All of her cultural conditioning was being short circuited as her mother contradicted everything that the mother ship was suggesting. “But she’s … you know …. FAT.”

“I know. And isn’t she beautiful?”

It was fascinating watching Pix’s face unfold, scrunch up, frown, crumple, then reopen. Eventually her brow became clear of furrows.

I said again, “bodies are really beautiful. Look at them all.”

And suddenly the whole beach opened up into a huge golden stretch of amazing, organic, moving, living structures. Tall, short, thin, fat, crumpled, smooth, long, lean, unusual, perfectly imperfectly proportioned flesh. Different shapes, different textures, all existing in this life of diversity and beauty and individuality. And Pix was nodding and she was seeing it too – with her massive, sea-blue, almond shaped eyes.

Look at this picture. 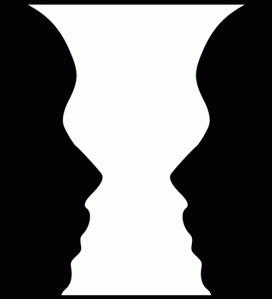 Do you see the two women, separate and confronting each other?

Or do you see the vessel?

It is kind of hard not to see the two faces, isn’t it? But if you really concentrate on shifting your mind and SEEING the white vessel, you can see it and hold that picture. The two faces then disappear.

Changing the way that we perceive bodies and beauty is the same. All our lives we’ve been conditioned by the media and by our cultural conversation that only some bodies are deserving of being called “beautiful”. Our children are born into this world and as parents we obliviously strengthen those beliefs. With every Barbie we’ve bought our girls, with every overheard conversation about weight loss and every negative comment we’ve made about our bodies because we don’t “fit the mould”, we strengthen the belief that only some bodies are beautiful. Our beliefs are the clay that sculpt the way we see the world and once set, it is almost impossible to see anything else.

Until it is pointed out.

Until an alternative image is presented.

And that is what happened to me and Pix that day on the beach. We shifted our focus and in that shift, the picture we saw before us was transformed. We suddenly perceived the vessel between the separate faces; that all bodies, just by their nature and by the fact they are HERE in EXISTANCE, are beautiful. And valuable. And worthy. And worth celebrating in all their gorgeousness.

And in that moment loads of other stuff shifted too. By choosing to See All Bodies As Beautiful the need to judge ourselves against some bizarre industry created “ideal” was dissolved. It was obsolete.

By choosing to See All Bodies As Beautiful, the need to measure ourselves or compete with others and feel ashamed when we don’t measure up was destroyed.

By Seeing All Bodies As Beautiful allowed us to suddenly experience our bodies as things to honour, accept, embrace and look after rather than squeeze in, squeeze through and cut away.

By Seeing All Bodies As Beautiful we had this new option; an option to create a foundation of self esteem which would allow us to live out our full potential rather than wasting our lives trying to reshape ourselves and our hard earned money on products to do this.

Because that is the point.